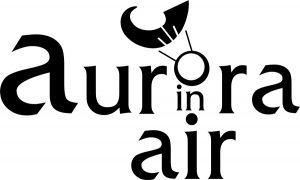 An artist-in-residency within VIADELLAFUCINA16 Condominio-Museo. An experiment of urban regeneration and collective transformation through the power of art. Turin, Italy.

viadellafucina16 was launched by Kaninchen-Haus in 2016, with the aim of giving life to the world’s first experiment of a Condominium-Museum. The project occurs within a majestic 19th-century building, that we find today in a state of decline, in the heart of the Turin’s district Porta Palazzo, close to the city centre,  where the biggest open air market in Europe rises. 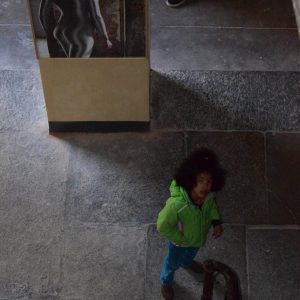 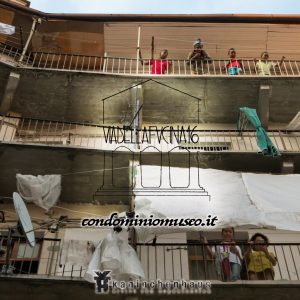 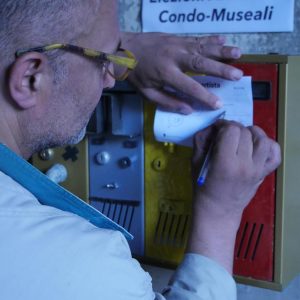 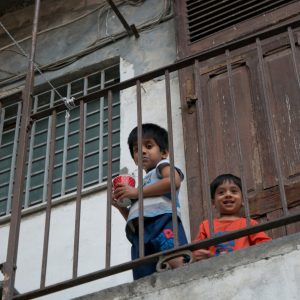 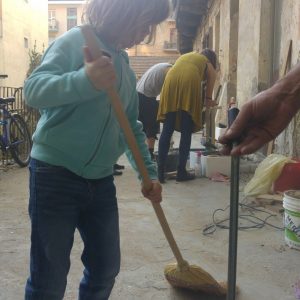 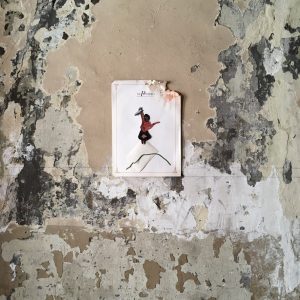 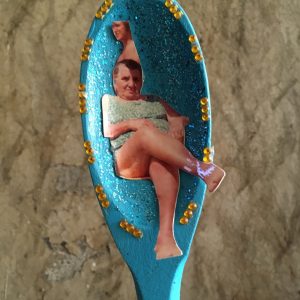 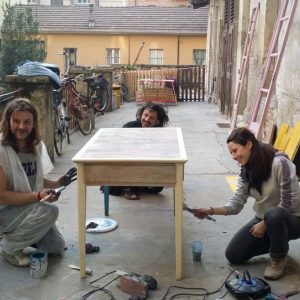 Through an international open call, whose 1st edition received over 400 candidacies, the artists have been invited to realize their artwork in the common areas of the building, with the purpose of promoting its regeneration and activating a dialogue among the tenants. The winning projects were selected by the inhabitants themselves (about 200 people of various nationalities, living in 53 apartments) with the support of our Scientific Committee of curators and insiders, on the basis of the artists’ ability to engage the community in the design and production of the artworks, to interpret the community’s desires and to activate new forms of sociality through a process of co-creation and collective care. “Condominium” is a Latin word formed by adding the prefix con- (“together”) to the word dominium (“domain, property, ownership”). Its meaning is therefore “shared property”.  It is a place where we experience the first form of democracy, and an intersection point between the public and the private domain. In this context, we wanted to experiment how artistic practice can become an activator of aesthetic and social regeneration. The condominium becomes thus a symbolic space where a community can represent itself, in the same way as, in the past, the artwork inside palaces used to represent the prestige of noble families. The work done so far transformed the complex into a multifunctional hub for artistic and cultural production and a unique workshop for social innovation.

Viadelladellafucina16 hosts works and performances by young artists as well as contributions by important masters such as Michelangelo Pistoletto or Giorgio Griffa.

viadellafucina16 constructs itself as an innovative juncture between the artistic practice and the living fabric of a defined community that, by experimenting within a small context, aspires to prove how art and culture can become effective tools to solve conflicts and lead to a collective transformation. Kaninchen-Haus is now working with the aim to making the project replicable in new buildings and cities. More info on condominiomuseo.it

The call is addressed to emerging or professional artists and curators, whose researches demonstrate a coherence with the concept of Condominium-Museum and its guidelines or with the thematic that Kaninchen-Haus has examined over the course of its history.
We are interested in all kinds of artistic expression or research but we particularly appreciate:

The programme was born from the will to renovate and enhance the efficency of the artist-in-residency format, in order to foster the integration of the foreign artists in the host territory and to capitalise their transitory presence towards the local community and its various cultural and entrepreneurial articulations.
The programme is inspired by a priciple of solidarity and brotherhood between artists; it will promote their international cooperation, overcoming the stereotype of the artistic production as an exclusively individualistic practice.
The historical area of Porta Palazzo (Aurora district) defines the headquarters of the residence.
Porta Palazzo – the largest open market in Europe, the point of reception in the city’s history of multiple migration waves – will provide not only the platform where artists can live and work, but will also be the thematic center of their interventions, to be developed through completion of works inspired by history or places of the district, site-specific projects, participatory projects involving directly the local community.
Turin is commonly considered the “Italian Capital of contemporary art”. It is the city where the most famous Italian contemporary art movement – “arte povera” – raised.
Turin hosts important artistic institutions such as Castello di Rivoli Museum of Contemporary Art, Egyptian Museum, National Museum of Cinema, Fondazione Sandretto Re Rebaudengo, Fondazione Merz, GAM – Galleria Civica d’Arte Moderna e Contemporanea. In November in Turin there are several important events like Luci d’Artista and Artissima, Italy’s most important contemporary art fair, Club to Club festival, The Others, Dama, Nesxt independent art festival, Paratissima.

The artists are hosted in an apartment  inside the building and they have access to the office, the meeting room, the bookshop – cafeteria (former doorman’s quarters) and a collective studio facing the shared garden (300 sqm).
Moreover, artists can exhibit and set up their projects and artworks both in the common areas or in the exhibition spaces managed by Kaninchen-Haus, inside the building. 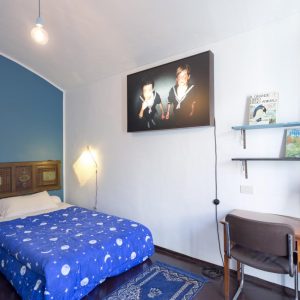 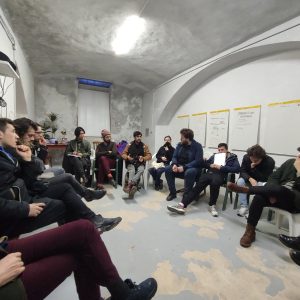 Travelling, foods and production costs are not included.
In case of selection we will assist you in the process of requesting funding by providing you with a formal letter of invitation.

Applications are reviewed on a rolling basis.
Selected artists will be notified via email. After the acceptance, we will request you to pay a deposit of 50% of the total fee within 10 days, upon the agreement of our Term and the Conditions.
Cancellation policy: The deposit won’t be refunded. The residue fee amount should be paid 7 days prior to the module start date.

The deposit can be paid via paypal or bank transfer. Details will be eventually communicated with the letter of acceptance.
Selected artists can choose to donate an artwork which will become part of the condominio-museo collection.

more info on the project: www.condominiomuseo.it

GO TO THE CALL

This site uses Akismet to reduce spam. Learn how your comment data is processed.

Aurora in AIR @ viadellafucina16 – call for artists and curators

Us: What divides us and what unites us? Call for Entries Touchstone Gallery Washington DC

We were doin’ okay, but didn’t even know it